A Woman, an Adventure Motorcycle, and her German Shepherd Copilot 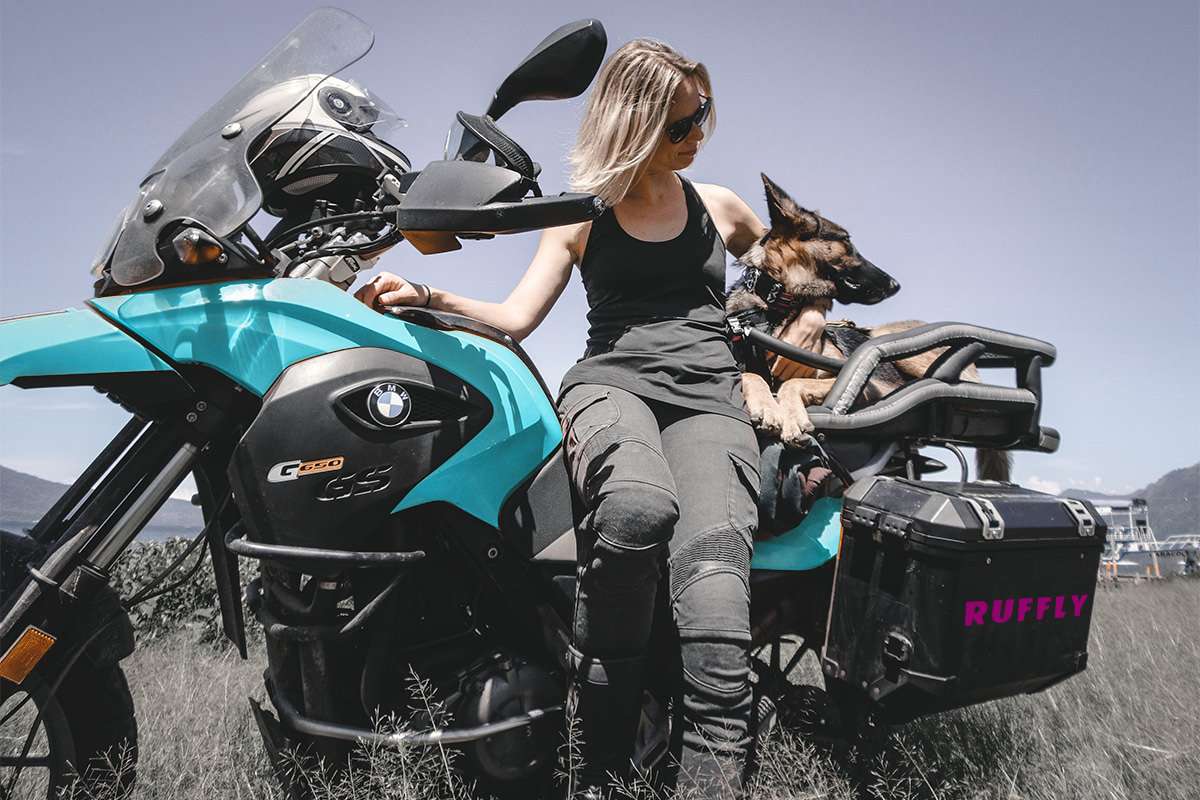 Jess shares her experience overcoming the fear and learning to ride with and a dog – a large German Shepherd, in fact – in a motorcycle dog carrier.

To be honest, I was really anxious about riding with a passenger on the back. Let alone to ride with a dog!

Even though I had put over 40,000 miles on my motorcycle, the thought of:

So, in the 5 years I had been riding, I only ever had Greg as a passenger. Only twice. Of course, I had never even considered that I might one day ride with a dog!

He often started on me about how important it is that I can take a passenger in case of an accident or if his bike were to have a problem. But I hemmed and hawed about practicing riding with a passenger next weekend…then pushed it to the next… and the next… 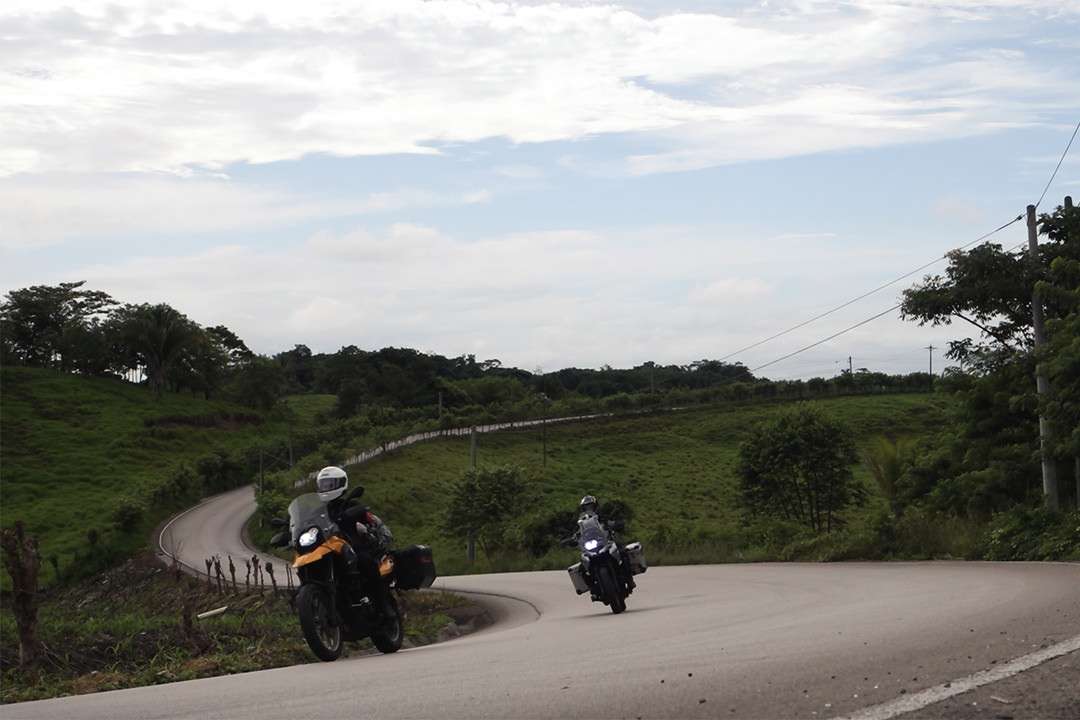 Then German Shepherd Moxie Came Along…

When Moxie came along, I still had the anxiety about having something on the back of my bike. Something that moves – a moving something that I have no control over – and the responsibility of keeping her safe. But that fear was overridden by the very exciting idea that I could ride with a dog. That I could bring Moxie with me wherever I go!

We searched the internet for a carrier that would fit a full-sized German Shepherd. There weren’t any options. Certainly none that would work on my tall BMW motorcycle. So, Greg went ahead and started designing. 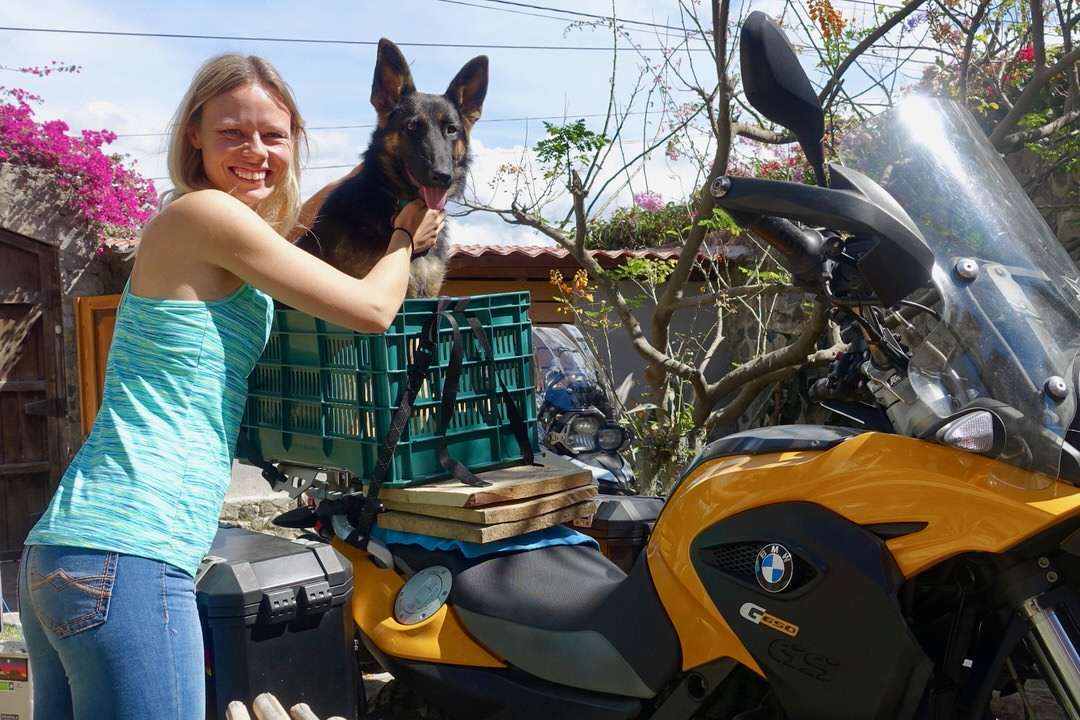 Ride with a Dog but How?

He put dog carrier v1.0 on the back of my bike and lifted Moxie into it. I thought how HUGE she looked up there! This looming tower that was surely going to knock me off balance!

The crate wasn’t going to work out since there was no room for Moxie to grow. She was about 45 pounds when we started this and we expected her to get to be about 70 pounds. Greg started working with the local metal shop owner to make his vision a reality. 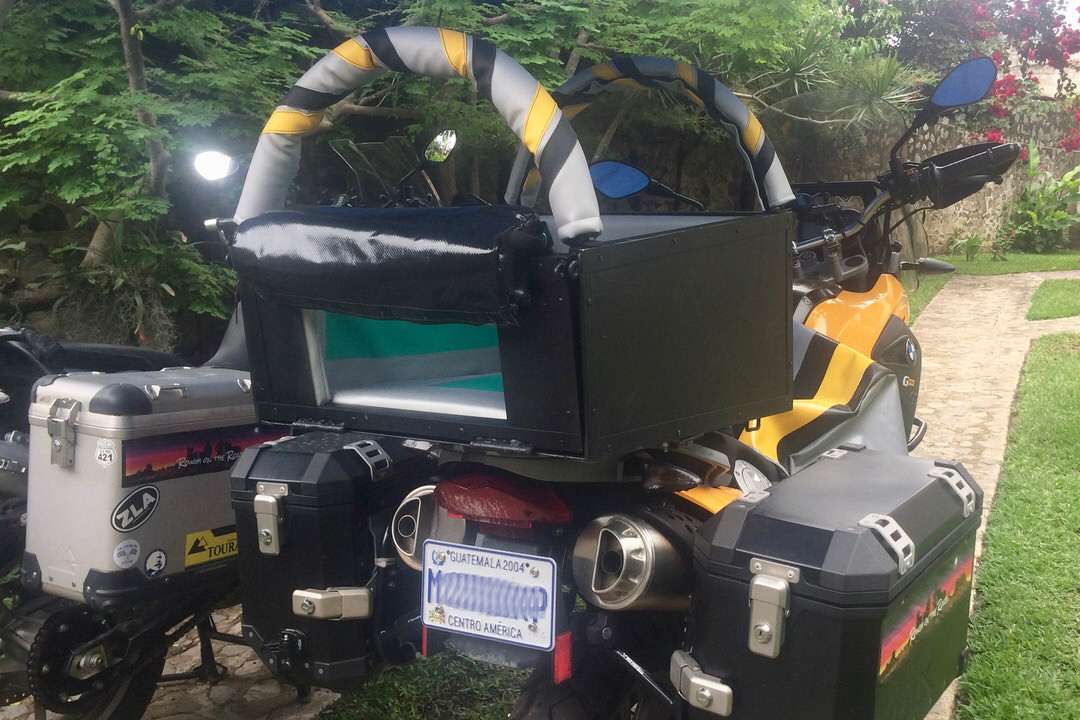 The Anxiety Was Overwhelming!

She would have to get used to being in it on the ground, then being in the carrier on the bike. She would need to sit still for 30 seconds, then a minute, then 2 minutes… you get my drift. Then it would be a whole other thing once we harness her in, put on her Rex Specs, and then actually turn on the engine!

In my eyes, it would take at least 6 months until we were even ready to roll down the driveway in neutral!

As is typical, Greg needed to push us along at a pace that was just a little faster than I was comfortable with. A couple of weeks later, Moxie was leaping up on the bike and getting harnessed in. So, I just had no choice but to suit up and ride with her in first gear on the dirt outside our house. 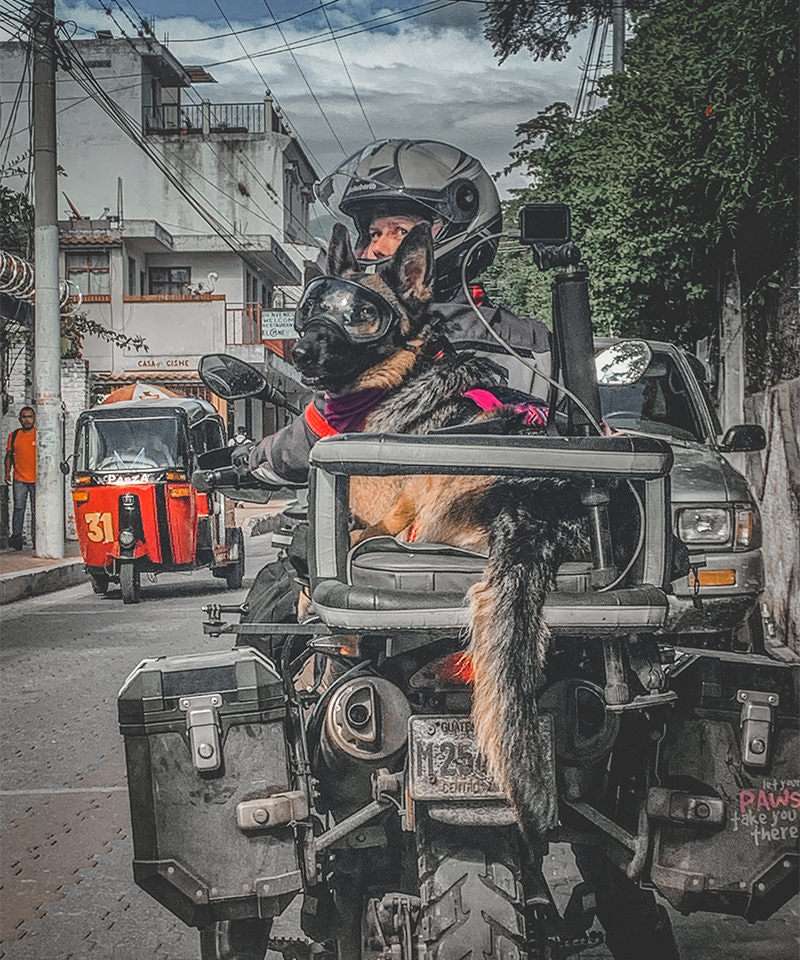 After I got used to having the weight on the back, it was pretty easy. It’s almost like having luggage on the back. Keeping her harnessed in a laying down position really prevents most of her movement but still lets her shift from side to side to look at whatever catches her eye.

At slow speeds on cobblestones and in traffic, it takes a little more concentration but these days it’s second nature. Through the high-speed of the Pan-American Highway and bashing along the rubbly, dirt roads that connect the small villages. And when we get to a off-road section that’s a bit more technical, Moxie hops down and runs alongside!

The Cherry on Top

The extra bonus are the looks that we get.

From the kids that openly laugh and point to the grandmothers in typical Guatemalan dress that crack a grin. There are the men that just stare dumbstruck in disbelief like they’ve never seen anything like this before – because they probably haven’t!

A woman on a big adventure bike is one thing but to ride with a dog? It’s just too much for some people to comprehend in the fleeting glance they catch as I ride by!

The best part is knowing that Moxie and I are putting a smile on someone’s faces and giving them something just a little extraordinary to think about as they go about their day.

Check Out Other Recent Posts

END_OF_DOCUMENT_TOKEN_TO_BE_REPLACED 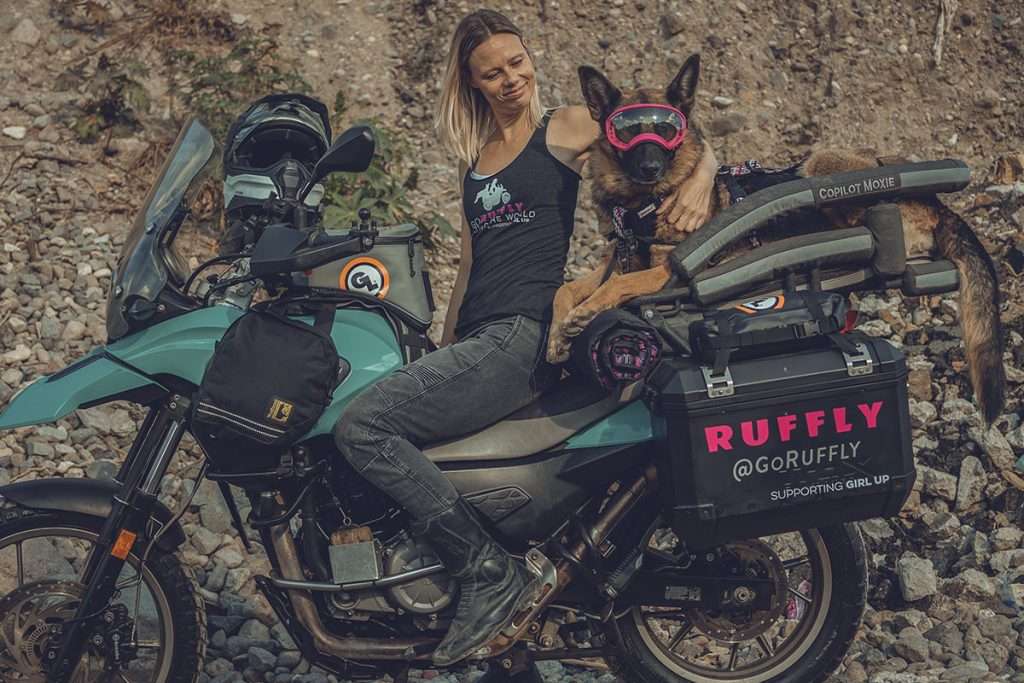 The K9 Moto Cockpit is a tubular, steel-framed motorcycle dog carrier for medium and large dogs that combines cushioned, rigid protection with an authentic, open-air experience.

END_OF_DOCUMENT_TOKEN_TO_BE_REPLACED 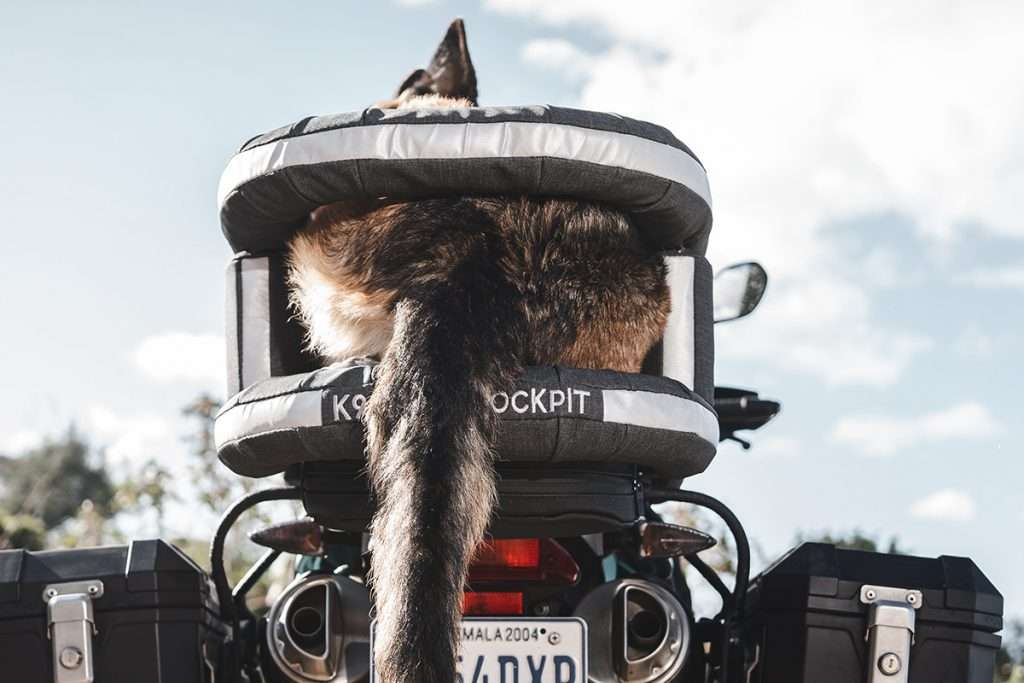 END_OF_DOCUMENT_TOKEN_TO_BE_REPLACED

Get the Gear You Need and Then Get Out There